“Among a hundred paintings, you could recognize mine, my goal was:

return to elegance in my models.” 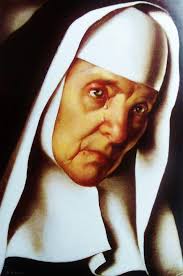 I went to Poland about 13 years ago with my Polish/American mother. On one of the days there, I walking around a book store and came across a biography of this amazing artist. I’ve always loved the Deco Era. Tamara De Lampicka was not only one of the most famous Deco artist of that time, but a Female and Polish. I was immediately drawn to her. 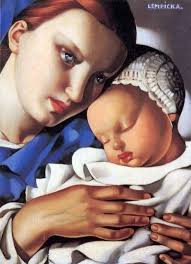 Tamara was born into a influential and wealthy family in Poland. She attended boarding school in Switzerland. She was raised to be her best.

During the winter of 1911, Tamara spent the summer with her grandmother in Italy on the French Riviera. Not bad for an upbringing. Here is where she developed her love for painting.

In 1912, her parents divorced, and Tamara went to live with her wealthy Aunt Stefa in Russia. While in Russia, she fell for a charming attractive Lawyer Tadeusz Lempicki while at an opera. He was known to be a hottie, successful, and quite the ladies man. She captured his heart and in 1916 they married.

During the Russian Revolution in 1917 the Bolsheviks (Liberal Democrats) arrested her Husband. She secured his release with some connections she had in Switzerland. After the release they traveled to Copenhagen then London and finally to Paris to where Tamara’s family had also escaped, along with numerous upper-class Russian refugees and they fled to Paris. There she studied privately at the Academie de la Grand Chaumiere. Her and and her husband had one child together, Kizette .

She truly began a bohemian life. Paris, 1920’s, chillin with Pablo Picasso, Jean Cocteau, and Andre’ Gide. She was very controversial for the time. She consider herself a bisexual and was quite promiscuous. Her husband couldn’t handle her scandalous and alternative way of marriage. Her art took over her life leaving her only child and husband attention less. He left her and they divorced in 1931. 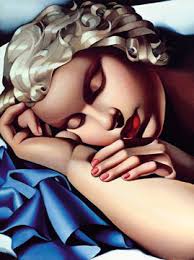 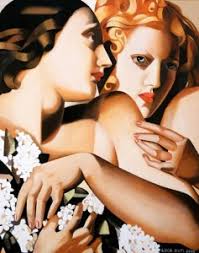 Feeling guilty for the neglect of her daughter she did a long term series painting her repeatedly, leaving a striking portrait series.

She spent her later years in the US and towards the end of her life her paintings regained popularity in the 1970’s.

All images from Bing Images. All information from www.delempicka.org, Wikipedia, and personal knowledge.

This song is so hauntingly beautiful…………………

Once upon a time the city of Alviso was  the main boating and shipping port of San José and the transportation hub for the Santa Clara Valley to the San Francisco Bay. Thru time that all came to pass leaving a ghost town of old cannery buildings and salty wet lands. On the end of  1513 El Dorado is a sweet little gem reminding us of Alviso in its golden era. It’s like a step back into time, the beauty and décor of the 1940’s. While Vahl is no longer around as she has  passed, her memory is still kept alive with  her family still running the place. The menu is still the same. Quite interesting choices and with five courses. On Sundays it turns into a piano bar. It’s worth the trip if your near San Jose and love that sort of dreamy step into a different era kind of reality.